Forty years ago, on a warm summer night in June, the old Wilmette train depot began its slow final journey, leaving its place on the west side of the railroad tracks at twilight for a new home on the site of a former Village parking lot three blocks away, on Wilmette Avenue. A big crowd of well-wishers showed up to cheer it on its way. Those who were there in 1974 still talk about the carnival atmosphere of “the depot move,” one of the most extraordinary sights that old downtown Wilmette has ever seen. 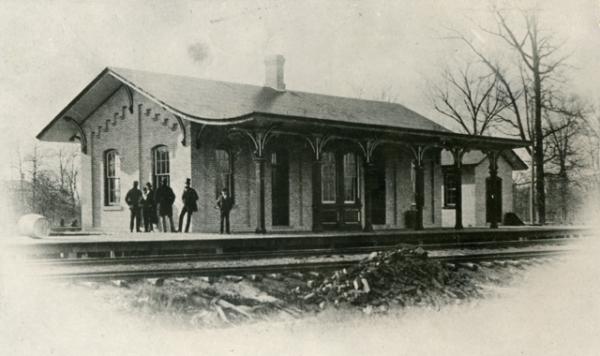 The events leading up to that memorable summer night had begun 100 years earlier, soon after Wilmette incorporated as a Village in 1872, when the town boasted a mere 300 residents. The first depot was built in about 1869-70, at a cost of $700, but it burned down at the end of November, 1873 (see Chicago Tribune for Dec. 3, 1874). At once $3000 was raised, supplemented by a $498 insurance payment on the old depot, to build a truly grand, brick station. By March of 1874 the plans were in place (see Evanston Index, March 9, 1874), and construction was presumably completed that spring.. It was, and is, a beautiful Italianate structure, with its gracefully curved roof, wooden columns with decorative brackets, ornamental brick detailing, and big bay window — the latter a place from which the ticket-taker could see passing trains.

This photo shows the depot soon after it was completed. In the beginning there was a single track, visible here in the foreground. This building served the community well for almost another quarter-century, as depot, meeting-place, and polling-place. 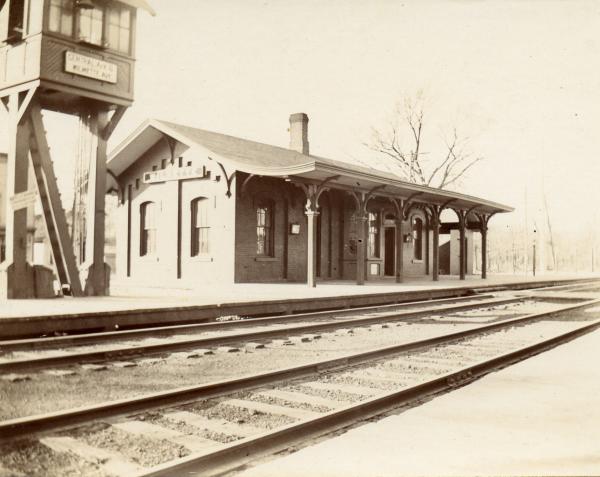 In this photo, taken perhaps 15 years later, the depot has acquired a “Wilmette” sign and a watchman’s tower. The foreground shows two sets of tracks.  When the other track was added to suburban stations, it was constructed on the side away from the existing stations in order to avoid having to move them; in Wilmette, this left the station next to the outbound tracks.

By the 1890s, one of the most common complaints about the old depot was that it was on the wrong side of the tracks to provide shelter for morning, inbound commuters.  The other concern was its outhouse, which violated new Village ordinances calling for all buildings to have indoor plumbing.  The latter problem particularly incensed the recently formed Wilmette Woman’s Club, which in 1896 complained that the existing depot was “old, out of date, and absolutely lacking in all sanitary conveniences,” and petitioned the railroad to replace it with a new station on the other side of the tracks (North Shore News, Feb. 29, 1896).

That new station, designed by the well-known firm of Frost & Granger, was completed in 1897 on the east side between Central Ave. and Wilmette Ave. The 1874 depot was moved a block north, where it served as “the old freight station” for 50 years, until freight service to the Wilmette station was discontinued in 1946.  Boarded up, its elegant platform roof and columns long gone, it was still standing in the fall of 1973, when Chicago & North Western announced plans to demolish the old building. 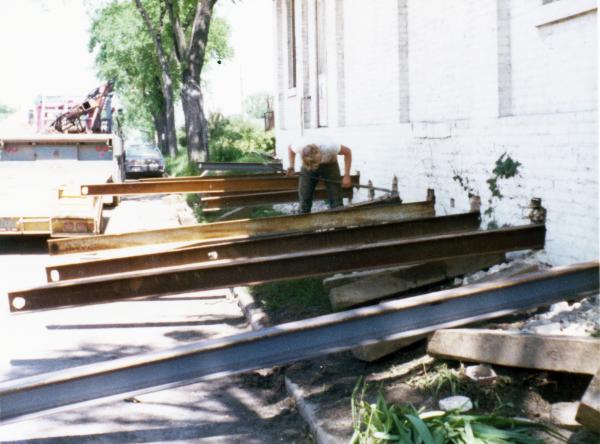 Here, steel beams have been inserted through holes made in the brick walls all along the bottom of the building: these would be used to lift the depot on and off the flatbed of the Mack truck. The chimney was also removed, temporarily, for fear that the vibration of the move would cause it to crumble.

The planned demolition of the 1874 depot was only one small part of a larger plan for 1974 that entailed the destruction of other familiar Village landmarks: the 1910 Village Hall, with its distinctive colonnades, the 1897 train station, and the big Hoffman Lumber Company building and lot east of the depot, which had been in operation on that spot for the better part of a century. These would all be replaced by a new station north of central, a new village hall, and lots of parking space for commuters and visitors.

All of these plans had their detractors, but it was the imminent loss of the little 1870s railway station, a building that had played so crucial a role in the growth of the young village, that most troubled Joanne Andrews, President of the Wilmette Historical Society. “Ten years from now, if the depot is destroyed,” she told a reporter from the Chicago Tribune, “I’m sure people then will shame this generation for not having saved this little brick piece of history.” With her colleagues on the Historical Society board, she determined to try to rescue the building. A Village-wide “Save the Depot” campaign prompted a generous response. Even Senator Charles Percy wrote to Wilmette’s President and Board of Trustees to praise the plan. A majority of Trustees were likewise supportive, overruling the Zoning Board to make available a municipal parking lot at 1135 Wilmette Ave. as the new site for the depot.

But could the depot be moved? One wrecking company told the Village Manager that the mortar between the bricks would crumble, and the old building would literally fall to pieces if anyone attempted to move it. But Advance Moving Contractors disagreed, and plans went ahead. Because Green Bay Road is a state road, state approval had to be obtained. Finally, after months of fund-raising and planning, the date was set: Thursday, June 13, 1974, at 7 p.m. 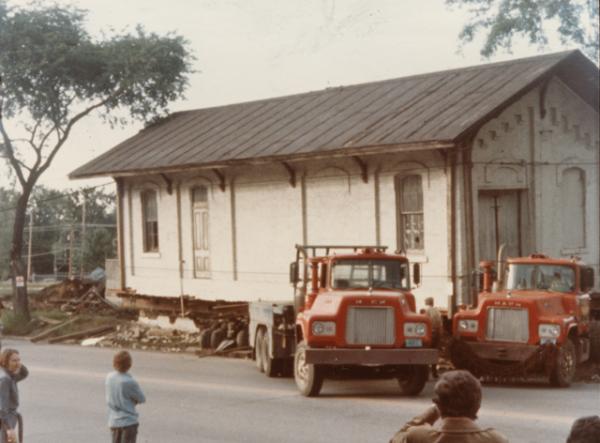 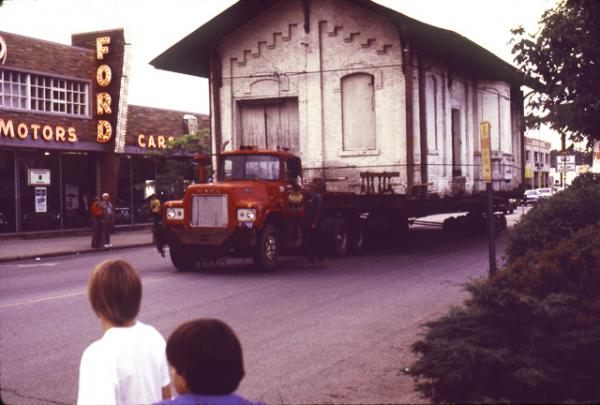 June 13, 1974. Accompanied by kids on bikes, members of the Historical Society, and many of the local supporters who had been part of the Save the Depot campaign, the old building slowly began its journey south down Green Bay Road, past Wil-Shore Ford and the Versino Brothers’s bike shop. 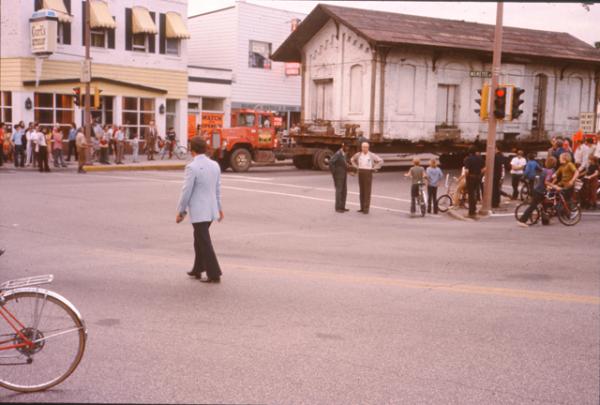 Here the truck is just passing the bike shop to reach Curt’s Restaurant on the corner, with its distinctive yellow awnings, before gradually making the turn onto Wilmette Avenue. 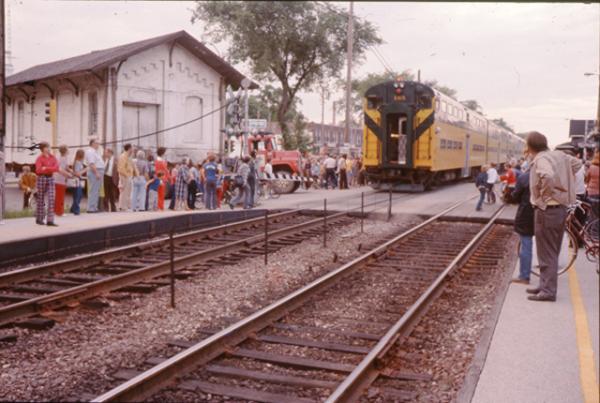 Waiting for the Train

Making the turn, the depot stopped to wait while the crossing gates came down and the early evening commuter trains made their stops – more slowly and warily than usual, because of the big crowd gathered near the tracks. Then, with infinite care, the big truck inched its way across. 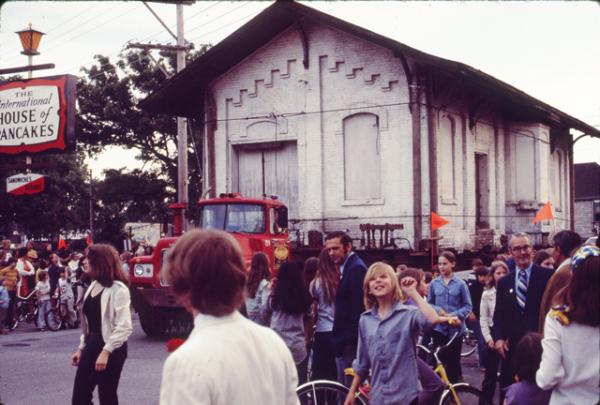 The first landmark the depot passed in downtown Wilmette after crossing the tracks was the big IHOP that stood at the corner of Wilmette Ave. and Poplar, where Jos. A. Banks and Panera Bread are today. The two men in suit-jackets in this photo are Fred Egloff (in the center) and George Bushnell, (at right, wearing a tie), both members of the Board of the Wilmette Historical Society and very active in the “Save the Depot” campaign. Egloff would later preside over the popular Auto Historica car show at the Museum, while Bushnell would soon publish the first edition of his Wilmette: A History (1976). 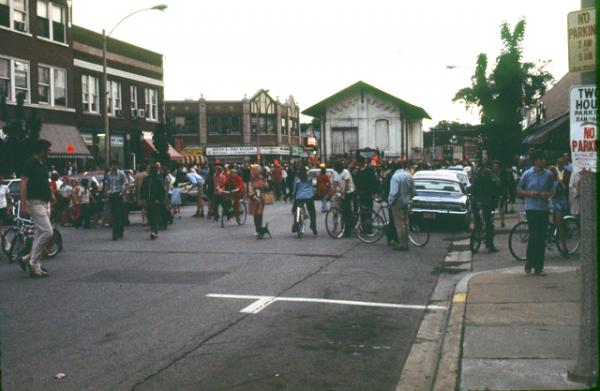 By the time the depot reached the heart of downtown Wilmette, at Wilmette Avenue and Central Avenue, the crowd had swelled to some 2000 onlookers. 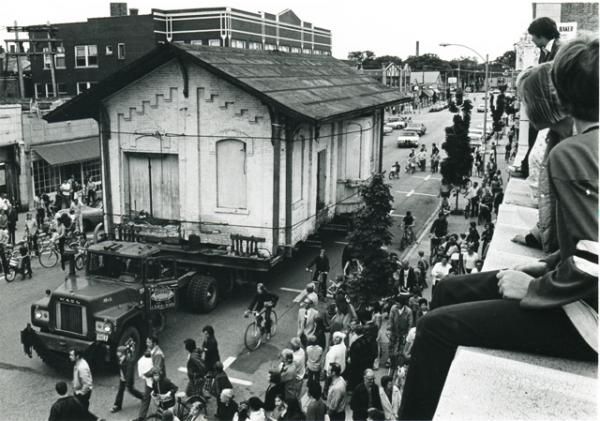 This photo by Berry T. Stevens, taken from the top of the Baker Building, shows the depot making its way down Wilmette Avenue past the Brown Building at left; in the foreground at left is the small building where the longtime pediatrician, Dr. Josephine Earlywine, had her office. 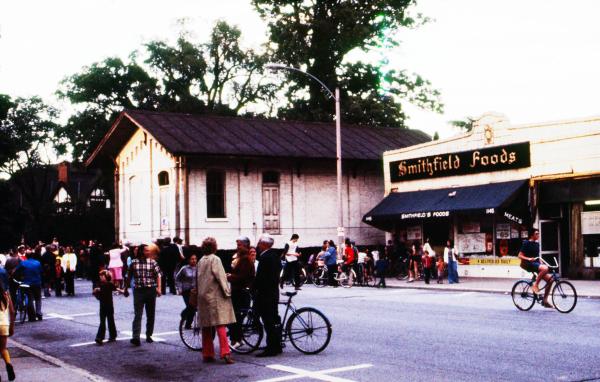 Having passed Smithfield Foods (where North Shore Community Bank stands today), the depot settled in next to its new home, on the lot across from St. Augustine’s Episcopal Church. A cement driver’s strike had kept the foundation from being ready in time, so the depot was set down next to the hole dug by J. Fiegen & Son, a company founded by a family whose roots go back so far in this area that Fiegens would have been around to see the station when it was first being built. 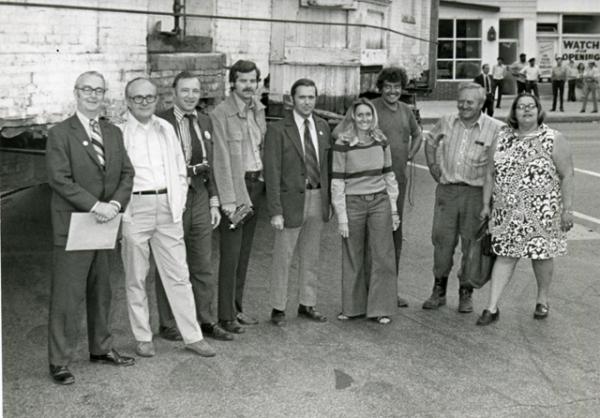 Left to right, posing with the depot on June 13, 1974, are officers and board members of the Wilmette Historical Society: George Bushnell, Ray Oversat, Bob Rempert, Alan Olson, Fred Egloff, Michelle Michelet Boyer, two members of the moving crew from Advanced Moving Contractors, and Joanne Andrews, President of the WHS.

The saving of Wilmette’s 1874 depot – the oldest surviving railway station on the North Shore – was the first local triumph of the movement toward historic preservation that was just beginning to take hold nationally in the 1960s and early 1970s, and a testament to the dedication of the men and women of the Society.