This online exhibit presents a selection of historical examples of racism in Wilmette, focusing largely on two main aspects: the attitudes and practices that kept Black people out of Wilmette, and the mocking stereotypes of blackface performances.

These examples (presented chronologically) reveal a persistent anti-Black bias among some residents for about 100 years. Such attitudes and actions created barriers, discouraging Black families from living in the community. At the same time, minstrel shows put on by various groups in Wilmette from the early 1900s to at least the 1940s ridiculed Black people under the guise of harmless entertainment.

Some Wilmette residents have organized and spoken out against discrimination and inequality.  The members of the Baha’i House of Worship, with their motto of world unity and tolerance, the Wilmette Human Relations Committee (founded in 1963), the North Shore Interfaith Housing Council (founded in 1972, renamed Open Communities), and the “Wake Up Wilmette! Walk To End Racism” protest in 2020 are a few examples.

Please note: This exhibit contains racist imagery and language. The Wilmette Historical Museum does not condone the use of racist slurs or stereotypes, and is committed to anti-racism. In addition, while this exhibit is limited in scope by our museum’s available resources, we hope the content here can be a launching place for further study of the effect of systemic racism on Wilmette’s history. We have not covered here the discriminatory practices extended to other non-White, non-Protestant people, but these practices did exist. 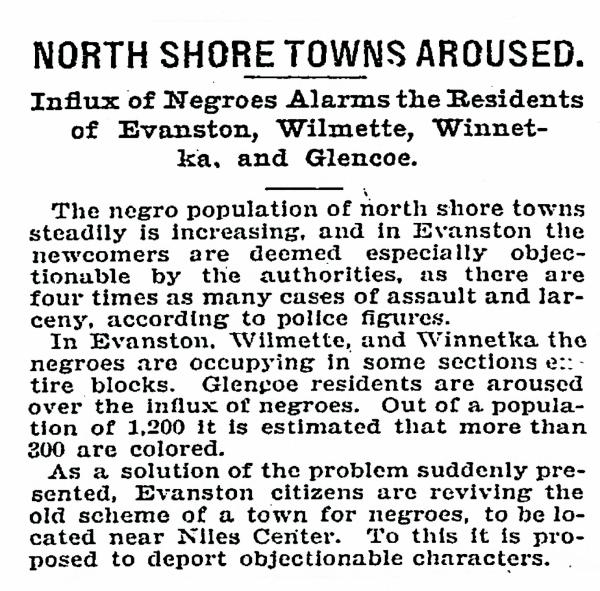 1904: “Influx of Negroes Alarms the Residents of Evanston, Wilmette, Winnetka, and Glencoe”

This brief 1904 Tribune newspaper article ties Black families moving into suburban areas with an increase in crime, a common tactic used to discredit families and create opposition to their arrival. The reporter’s assertion that Blacks were living in “entire blocks” in Wilmette has no basis in fact. The article outlines objections by White families to Black families moving into North Shore towns and suggests that segregation in a separate town was one “solution.” Housing segregation, along with zoning ordinances, were tools for keeping Black families out of suburban areas. 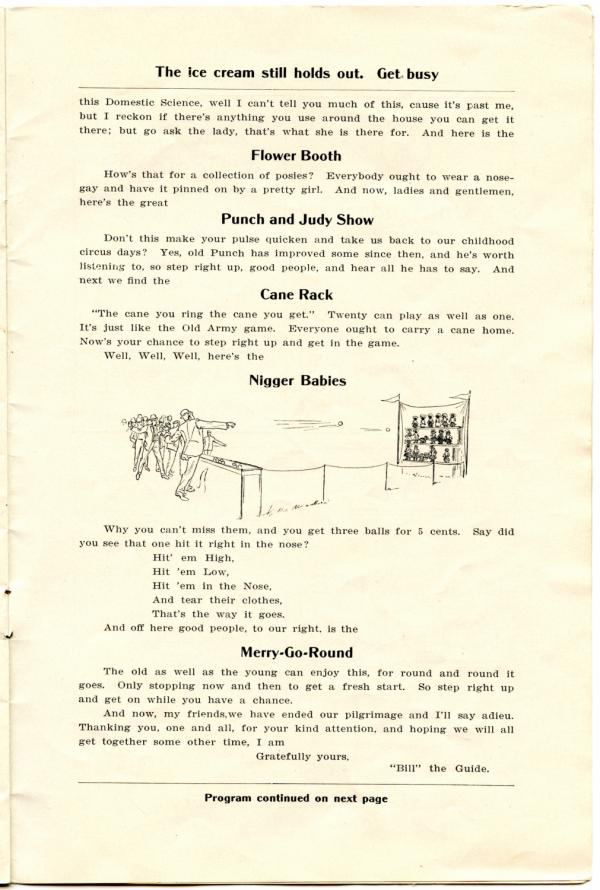 Among the festivities of the 1904 Wilmette County Fair (put on by the Ladies’ Guild of St. Augustine’s Church) were a flower booth, merry-go-round, Shetland ponies, and two games: “N—– Head; or the Ham What Am,” and “N—– Babies,” the latter of which is shown below.

“So you might as well take a chance and knock his head off,” instructs the program regarding the former. For the latter, a poem: “ Hit ‘em High,/ Hit ‘em Low, / Hit ‘em in the Nose,/ And tear their clothes./ That’s the way it goes.” 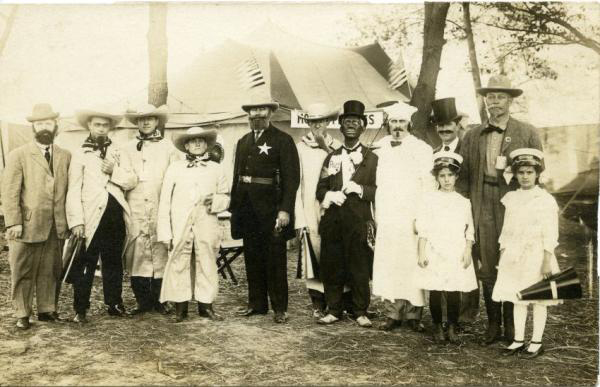 The Ouilmette Country Club put on a “county fair” that also featured plays and skits. The man in blackface with the name “PAZZ” pinned to his jacket, wears a suit, top hat, tie, and gloves, following the well-established racist caricature of the “Zip Coon.”

Minstrel shows emerged as entertainment in the 1830s. “Jim Crow,” in fact, was a minstrel show character created in this early period. After the Civil War, amateur minstrel shows grew in popularity. Societies, groups, and clubs performed amateur blackface, as evidenced by the materials from our collection. Blackface performances were a commonplace form of entertainment well into the 20th century. 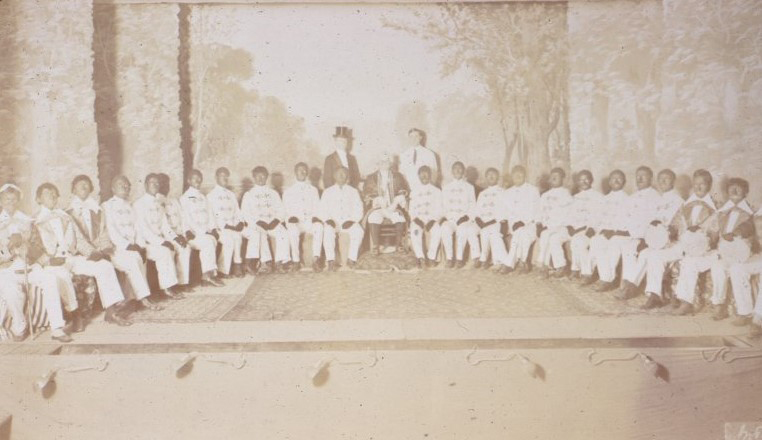 Aside from the three men at center, every member of the “Ouilmette Coontown Cabaret” is in blackface. The Ouilmette Country Club (which eventually became the Michigan Shores Club) held an annual minstrel show. 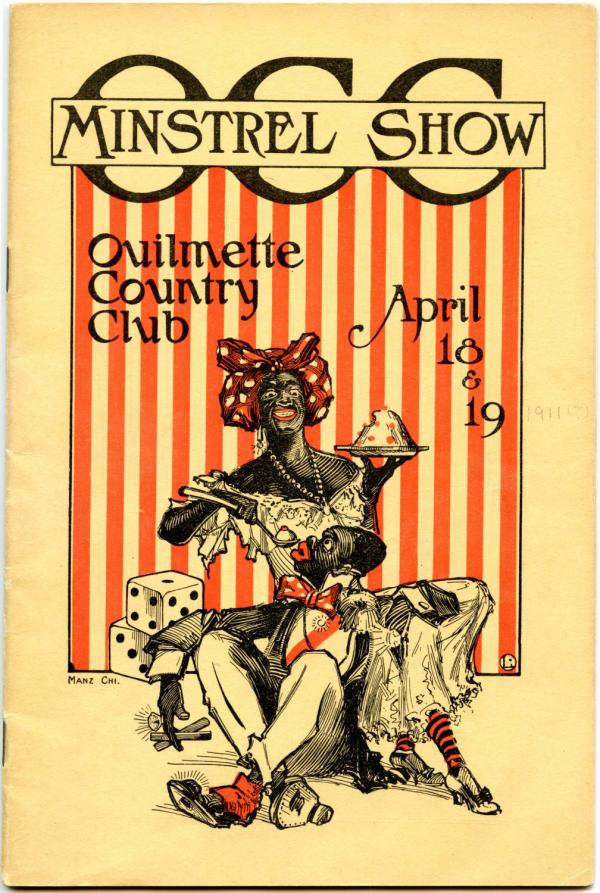 The show included skits with titles such as, “Old Time Colored Preacher,” “Courtship of a Colored Suffragette,” and “The Boy Who Stuttered and the Girl Who Lisped” with the “Pickaninny Chorus.”

Hostility toward Black citizens intensified in the early 1900s in the US, and Wilmette was no exception. According to this report in the local newspaper of the time, a group of White neighbors in the vicinity of Elmwood Avenue and 17th Street made an appearance at the Village Board meeting on August 5, 1913, to protest the sale of property to a Black family. According to the article, they presented a petition which read, in part, ” We respectfully request that each citizen use his influence to prevent further bringing into the village of negroes, particularly with the real estate dealers handling property in Wilmette, to induce them to cease selling or renting to undesirable people.” As noted in the Village Board Minutes, the petition was described as “praying relief from unsanitary conditions in an over crowded house on Elmwood Avenue near Ridge Avenue” and was referred to the Public Service Committee and the attorney. Using legal maneuvers to harass Black families was one tactic used to try to force them to move out of a community.

Chicago’s African-American newspaper reported on the 1913 story about Wilmette neighbors organizing to drive Black residents out of the village and keep them out. The Defender journalist writes, “’Tis a pity a few prejudiced agitators have enough power to upset a whole community for a time, but it is so, and the only thing for us to do is to be sure we are right, then stand our ground against the world, if necessary. There are the good people in Wilmette whose voices will be heard – people who stand for something. It is the empty barrel that makes the most noise.”

In 1913, a group of Wilmette residents organized the Wilmette Civic Association whose purpose was to keep Black families out of the community, described in another local newspaper article as an “invasion.” The association’s by-laws couched their aims in phrases such as “to discourage and prevent, so far as possible, the sale or rental of property to undesirable persons” and “to discourage the construction and erection of unsightly objects.” African Americans could not be members of the association. The group’s claim of “unsanitary conditions” against Black neighbors aimed to have them cited for violations and fined by the Village of Wilmette.

A.H. Edmonds, African American janitor for the Brown Building in downtown Wilmette, received an anonymous, poorly written note threatening his life unless he left town. The note began, “I see that you are bringing negroes to this village to work. this has got to be stoped [sic].” As noted in the news article, this was a form of the black hand letter, a letter threatening bodily harm usually associated with Italian gangs at that time. Like this letter to Mr. Edmonds, such messages usually contained crude drawings of skull and cross bones, a bottle with a poison label, and the like in the margins. Edmonds, who lived in Evanston, reported the threat to local authorities. 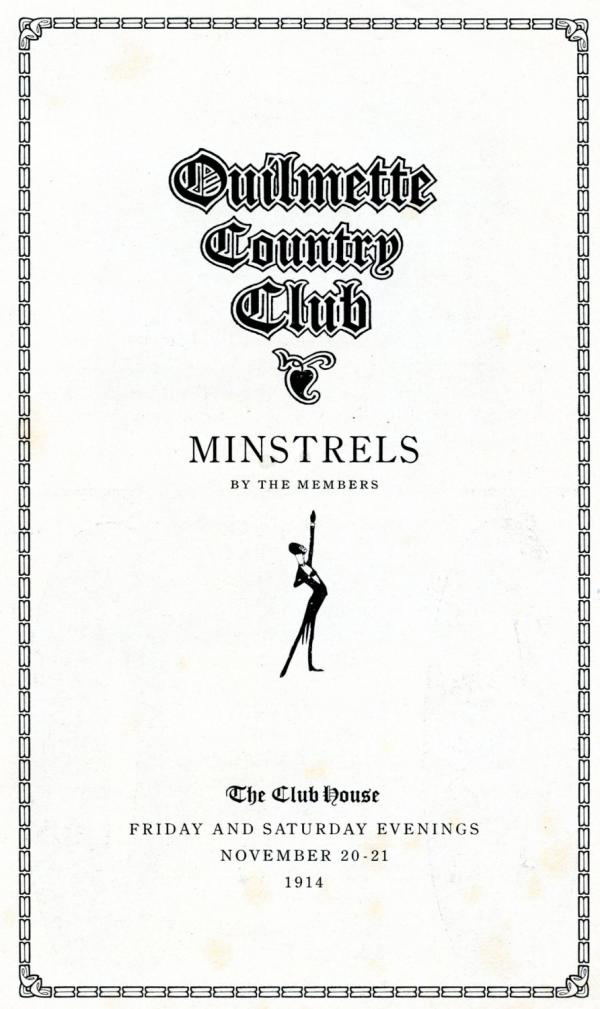 The Ouilmette Country Club Minstrel show’s 1914 program featured illustrations of a common racist caricature, the “coon” or “zip coon,” who was usually represented in a suit with exaggerated tails, tie, and sometimes a top hat. 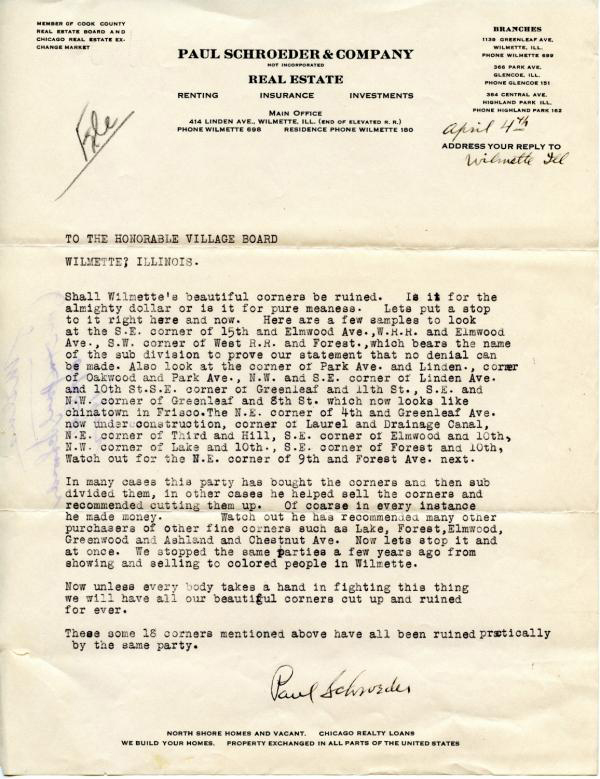 In this letter to the Village Board, real estate company owner Paul Schroeder complains about an unknown “party” developing and subdividing lots in Wilmette. This offending developer, Schroeder protests, is ruining the aesthetic beauty of Wilmette, but the true source of his outrage seems to point elsewhere. In the second paragraph, Schroeder writes, “We stopped the same parties a few years ago from showing and selling to colored people in Wilmette.”

Schroeder’s admission reveals the power of Real Estate agents in housing discrimination — if agents refused to show or sell to Black families, they could effectively (and quietly) keep communities segregated. 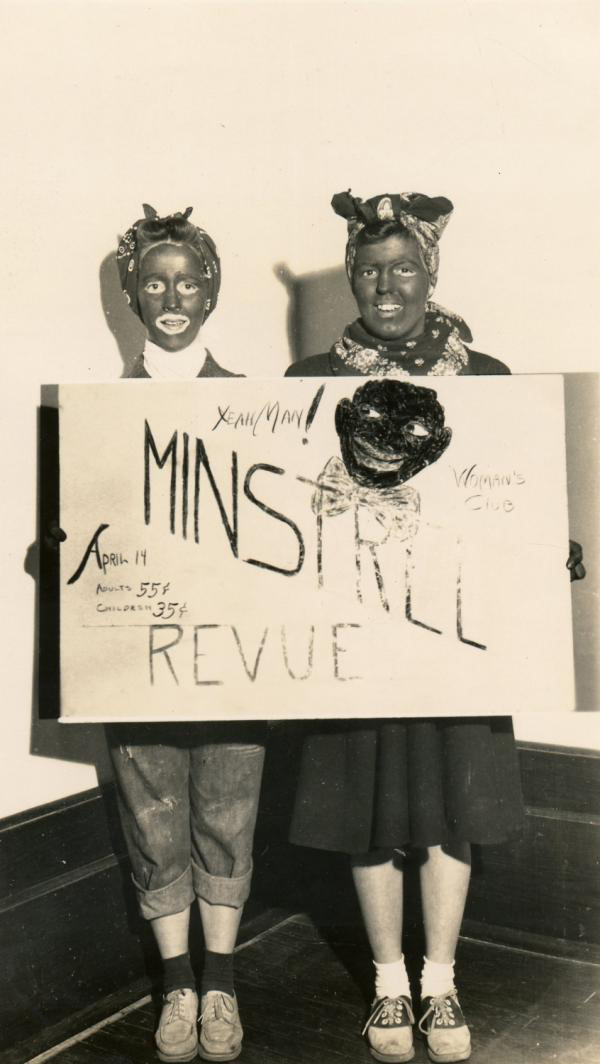 In this 1939 photo, two cast members in blackface are holding a sign for the “Minstrel Revue,” presented by the St. Augustine’s Episcopal Church at the Woman’s Club of Wilmette. 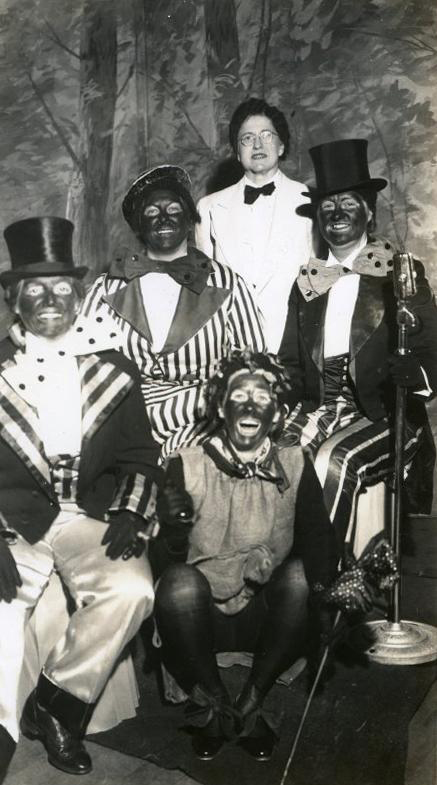 1941: Members of the Woman’s Club of Wilmette in Blackface

Performances with characters in blackface continued well past the early 20th century, and it was not only private clubs who participated in racist caricature as entertainment. Local groups, including church groups, also put on minstrel shows in Wilmette until at least the 1940s. Nationally, it took Black mothers, horrified at the prevalence of blackface in their children’s schools, to stop this common practice in the 1950s and 1960s. 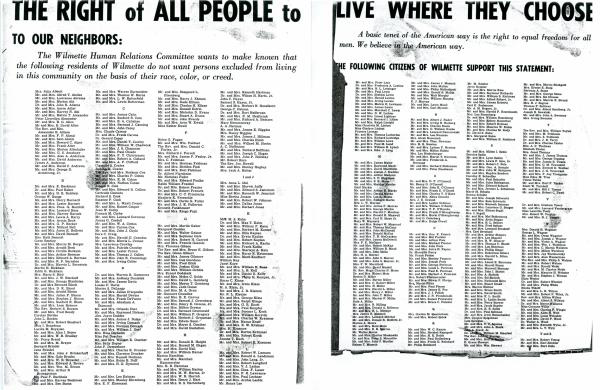 The Wilmette Human Relations Committee was a grassroots organization formed by Wilmette residents in 1963 to abolish racial and religious discrimination and intolerance in the community. Their work extended into many areas, including petitioning the schools to hire racially diverse faculty, contacting legislators to support civil rights legislation, and working with homesellers and homebuyers in the community to facilitate sales to Black families. They placed this ad in an effort to reach out to the wider community, letting them know that there was support for a diverse community among its residents. 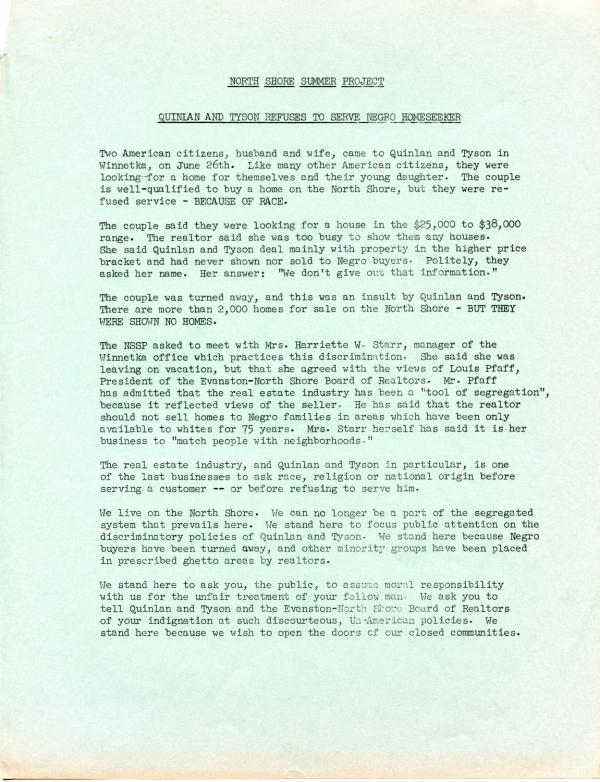 The North Shore Summer Project was a 1965 campaign to address housing discrimination on the North Shore. Organized by the Chicago chapter of the American Friends Service Committee and staffed by local student and adult volunteers, part of the campaign sought to persuade area realtors to extend equal service to all potential home buyers, regardless of race, religion, color or national origin.

As described in this leaflet titled, “Quinlan and Tyson Refuses to Serve Negro Homeseeker,” African American families were being turned away from local real estate firms on the North Shore. They were not shown any houses even though there were many for sale. The Project sought to document this practice and to confront real estate agents and the Evanston – North Shore Board of Realtors in an effort to end this form of discrimination.

As the leaflet asserted, “We stand here to focus public attention on the discriminatory policies of Quinlan and Tyson. We stand here because Negro buyers have been turned away, and other minority groups have been placed in prescribed ghetto areas by realtors.” 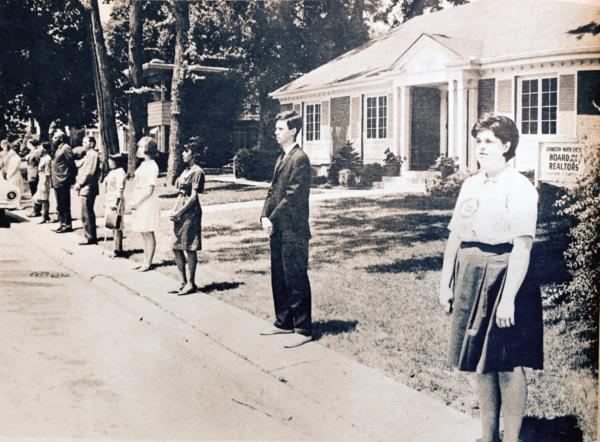 In this July 1965 photo, North Shore Summer Project (NSSP) student volunteers are seen standing silent vigil outside the headquarters of the Evanston – North Shore Board of Realtors, 3009 Central Street, Evanston, to protest the racially discriminatory housing system on the North Shore. At the time, realtors refused to show a North Shore house to African-American families, a practice of long-standing that had served to keep the community closed to people of color.

Silent vigils were held outside real estate offices in other communities as well. Rev. Emory Davis, NSSP chairman and pastor of the Bethel AME Church in Evanston, explained, “We are holding these vigils to say that we no longer live under a segregated system. We are announcing our responsibility for having been part of it for so long. Now we are asking our fellow residents of the North Shore to join us in asking for a change.” The students also canvassed 2,000 home sellers about their views on selling to Black families and other minorities. 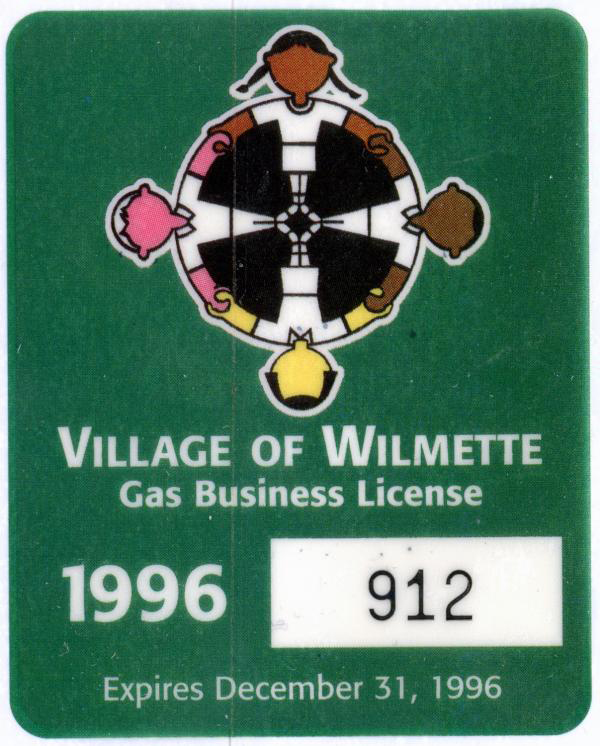 Controversy erupted in late 1994 about the design for the 1995 Village vehicle sticker depicting a circle of children of different ethnic backgrounds holding hands. The image was created for the Village Community Relations Committee’s street banners, which included the words “Unity in Diversity.” Some residents, including one Village Trustee, objected to the image as the vehicle sticker, arguing that its display on an individual’s vehicle was a First Amendment issue and a political statement because “multiculturalism is a political bumper sticker.” In light of this flap, Village officials backed down and used an image of the CTA station in 1995. However, the majority of residents backed the use of the unity sticker, demonstrating their support by writing letters to the editor of Wilmette Life and showing up in large numbers at Village board meetings. As a result, it became the design for the 1996 sticker. While the sticker was not meant to create racial harmony on its own, the dispute revealed that a minority of residents did object to community diversity.