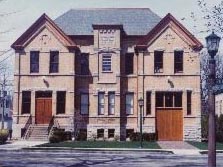 The building was the town hall for the Village of Gross Point. Founded in 1874 (two years after Wilmette), Gross Point was largely a farming community with its major business district along Ridge Road. Among the town’s businesses were approximately 15 taverns that brought in necessary tax revenues to fund village services. However, temperance drives began to close the saloons in the second decade of the 20th century, and in 1919 the coming of Prohibition sealed their fate, and that of the village. Without its income from liquor licenses, Gross Point went bankrupt.

In the years following its dissolution and annexation to Wilmette in the 1920s, most of the Village’s records were lost, leaving few clues as to what actually occurred in the building. What we do know about the Gross Point Village Hall is that the first floor was used for administrative purposes, most notably the village clerk’s office. The building also housed the village police and fire station. Four jail cells were located in the basement, and the firehouse was situated on the north end of the first floor. The second floor, one grand hall, served as a meeting and social center for many groups in Gross Point and nearby communities.