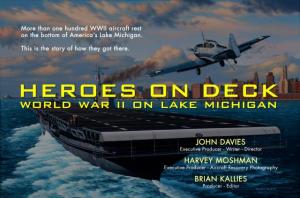 The museum welcomes multi-Emmy Award winning independent producer Harvey Moshman for a screening and discussion of his documentary film, Heroes on Deck: World War II on Lake Michigan. The film tells the story of the forgotten World War II fighter planes at the bottom of Lake Michigan, the brave pilots who trained in them, and their link to U.S. victory in the Pacific. The film showing will be followed by a Q&A session with Mr. Moshman. Watch the trailer here. We hope to see you there!

After a long career in local and network news, and as the producer of WTTW’s Wild Chicago, Mr. Moshman began producing historical documentaries for PBS, including his most recent effort: Eastland: The Shipwreck that Shook America, with collaborator Chuck Coppola.

Registration for this event will close on Thursday, November 3rd.