Wilmette was not immune to the tensions of the turbulent Sixties. According to Vernon Squires, who served as Village Trustee (75-78), Village President (81-89), and campaign manager for the Harmony Party in ’69, the Vietnam War and other events of the Sixties contributed to a more impassioned political atmosphere in Wilmette. There was also a feeling of the “old guard” versus the “new guard.” Some in the Village government opposed change whereas others were “impatient with the pace of social progress.”

Prior to 1969, Wilmette elected its President, Trustees, Park District Comissioners, and Library Directors through a caucus system which ultimately formed the Harmony Party. However, after a tense 1969 Harmony Convention filled with what Thelma Brook Simon said was “smoldering dialogue” from both “ultra liberals and ultra conservatives,” several candidates left the Harmony Party to form the United Party, a more conservative group.

Jim Schwietert, presidential candidate from the United Party, and Harold Webb, the presidential nominee from the Harmony Party, would spend the next 10 months locked in an intense political and then legal battle. Simon, Wilmette Trustee from 1961 to 1969, has remarked that what followed was “the most bitter political battle in Wilmette’s history, with indiscriminate use of incendiary labels: ‘fascist,’ ‘commie,’ ‘****** lover,’ and the red herring that the Harmony Party advocated ‘low cost housing.'” After the first election was declared invalid, with a second election due to take place, mudslinging, personal attacks, and race and religious schisms created an even more intense campaign. It would take years for Wilmette to cool down after this hot election.

This exhibit showcases documents and objects from the ’69 election, including campaign buttons and flyers, letters, photos, newspaper articles, and more. 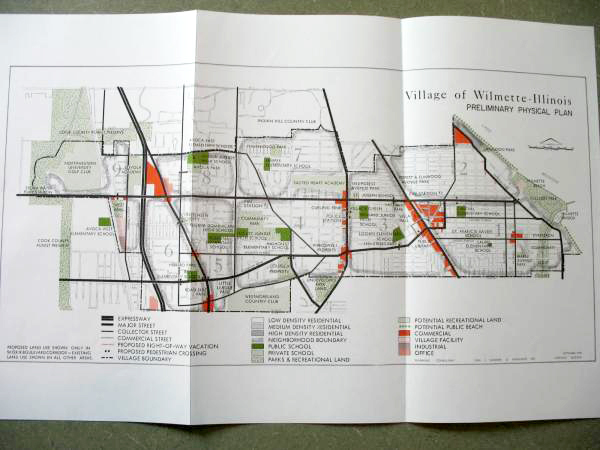 A map from a “comprehensive planning program” the Village of Wilmette created in 1968 to outline their goals and objectives for the year. The general consensus was that Wilmette was to maintain “single-family detached residences, good schools, fine parks, lakefront, and many trees.”

Prior to 1969, Wilmette used a caucus system to select candidates for election. The Creative Committee, a group of civic organizations in Wilmette, would choose several delegates from each precinct to attend the Harmony Convention. At the Harmony Convention, delegates would be interviewed and nominees would be selected by the Village Board. These nominees would make up the Harmony Party. This meant that candidates usually ran unopposed and voter turnout was small. Leading up to the Harmony Convention of 1969, expecting another dull election, the Board decided to set up polls in six precincts instead of polls in all of Wilmette’s 34 districts. This would create a lot of turmoil during the election. 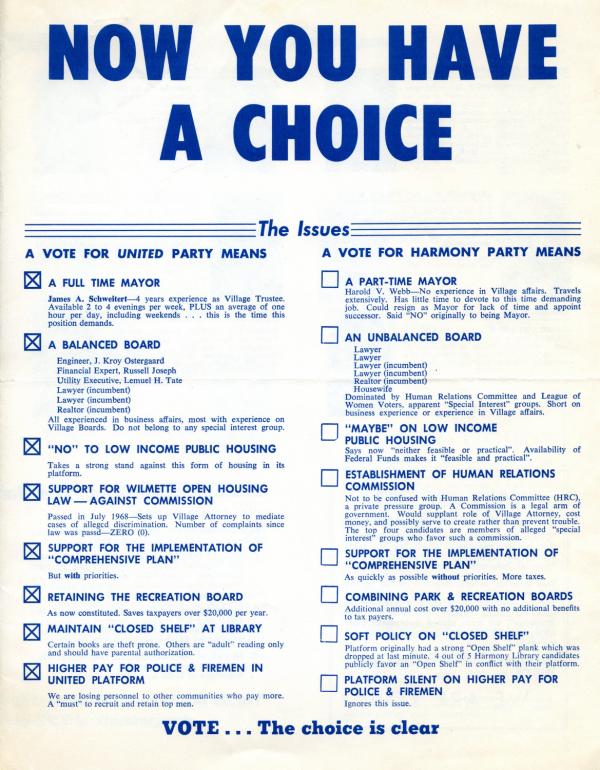 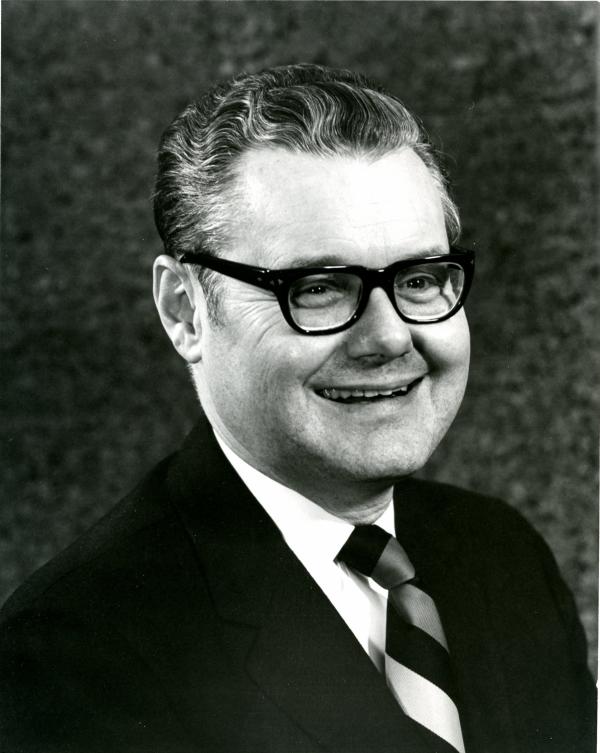 James A. Schwietert, mayoral candidate for the United Party. 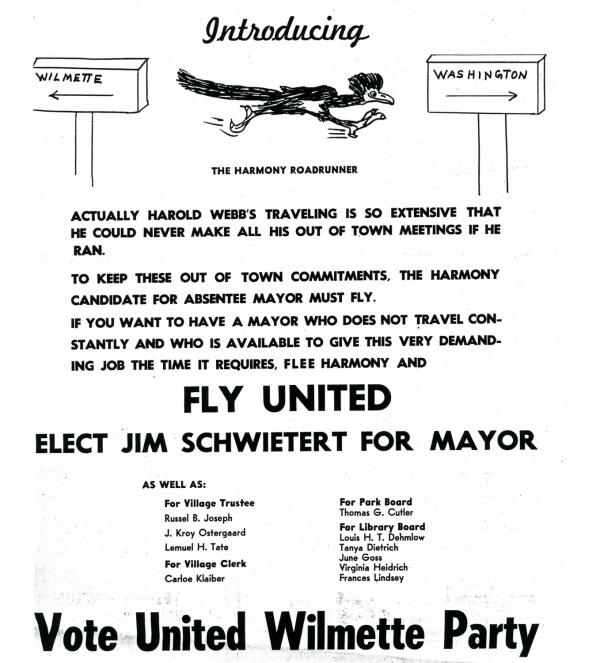 Personal attacks such as these were employed by both parties over the course of the election. Here, the United Party accuses Harold Webb, Harmony Party presidential candidate, of having too many out of town commitments. 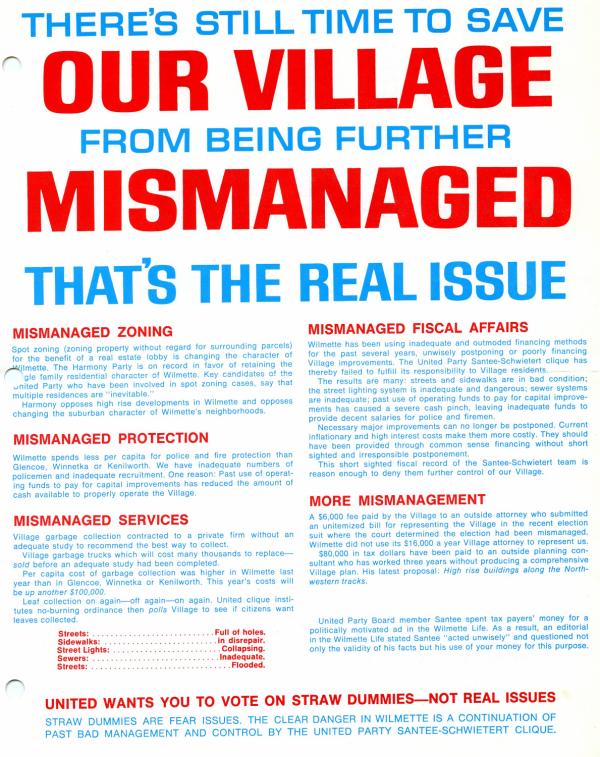 The Harmony Party ran on a platform of eliminating mismanagement. They urged residents to consider the “real issues,” such as zoning, protective services, repairs and construction, etc, rather than the “straw dummies” featured in the campaign by the “Santee-Schwietert clique.” Kenneth Santee had been Village President since 1965; James Schwietert had been a Village Trustee since 1965. 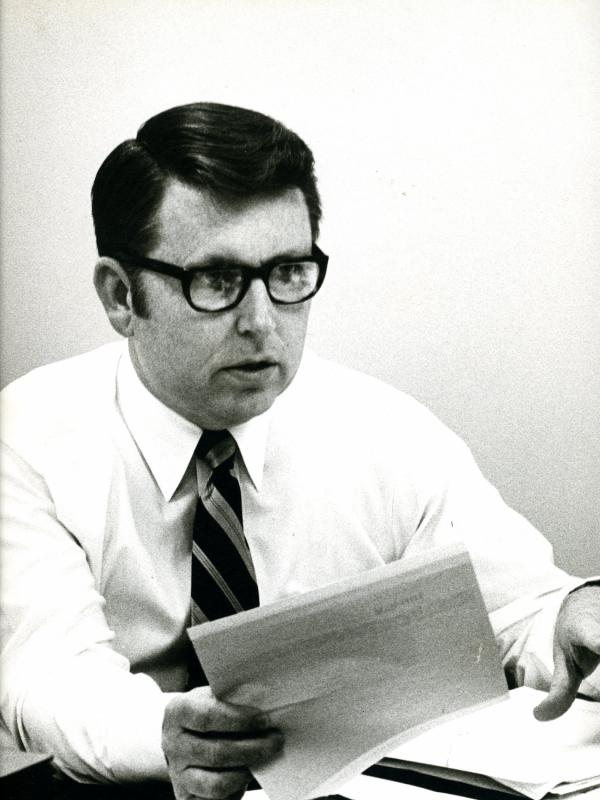 A campaign photo for Harold Webb, mayoral candidate for the Harmony Party. 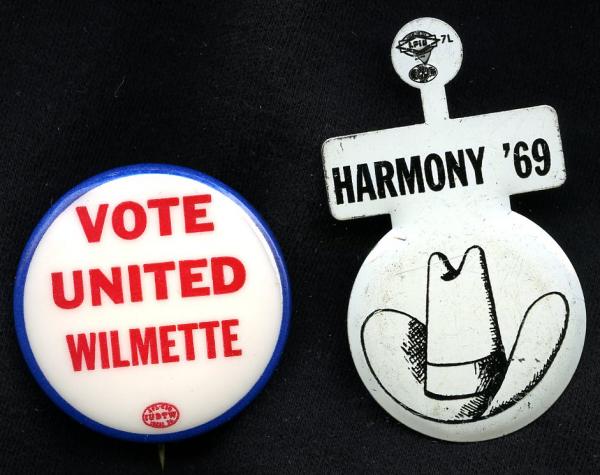 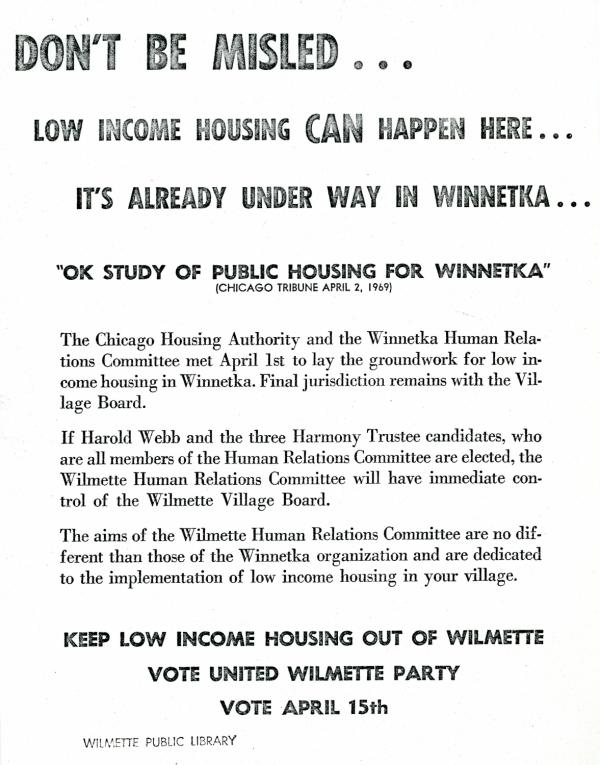 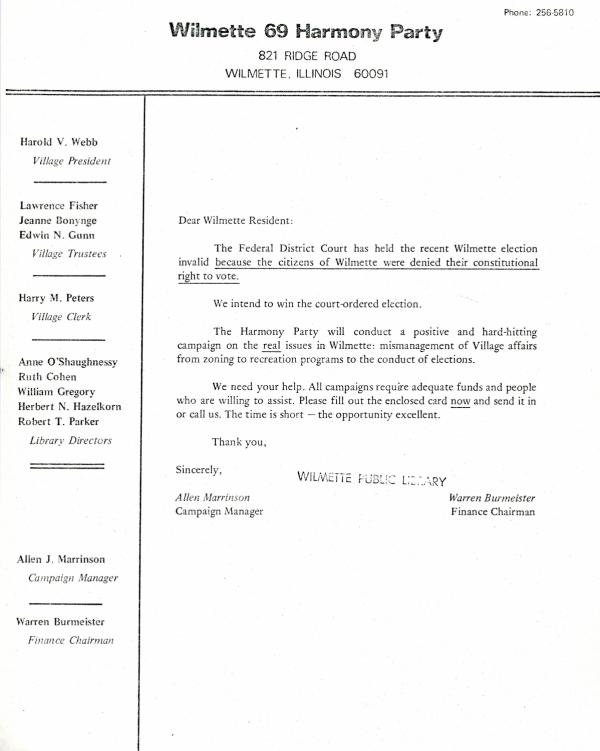 Violation of Due Process and the 2nd Election

Normally, about 2,500 people would vote in Wilmette local elections. In 1969, however, about 10,000 people turned out to vote. Unfortunately, there were only six polling places. “People waited to vote for hours throughout the day,” remembered Thelma Brook Simon. “Some had to leave the polls to go to work without voting, but then returned after work, and still couldn’t vote. When the polls closed at 6pm, there was a 2 to 4 hour wait to vote at most of the 6 polling places. Still there were hundreds who couldn’t vote.”

The United Party won the election. Their celebration was cut short, however, when members of the Harmony Party filed a lawsuit against the Village Board, claiming a violation of “due process” by denying residents their right to vote. A federal judge declared the first election invalid, and ordered a second election to take place in November. 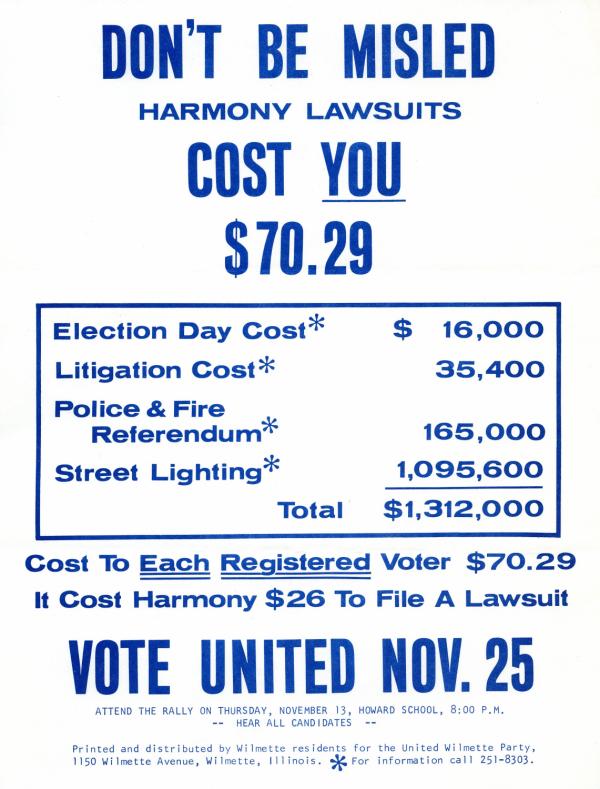 Cost of the Second Election

A United Party flyer showing the expenses of the second election. According to Vernon Squires, the Village Board intended to appeal the federal court decision for a second election, but later decided against it, and the election went forward the following November. 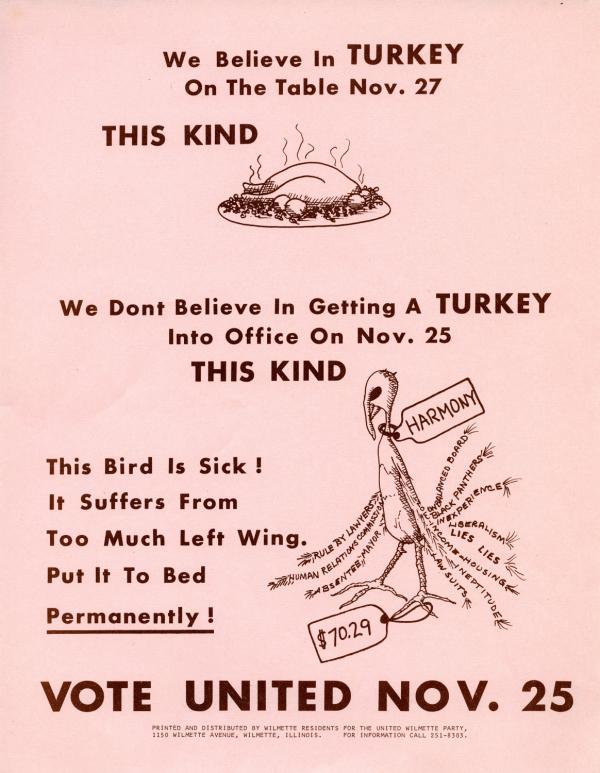 “Too Much Left Wing!”

With the approaching second election in November, both parties continued their attempts to discredit each other. Here the United Party accuses the Harmony Party of being too liberal. 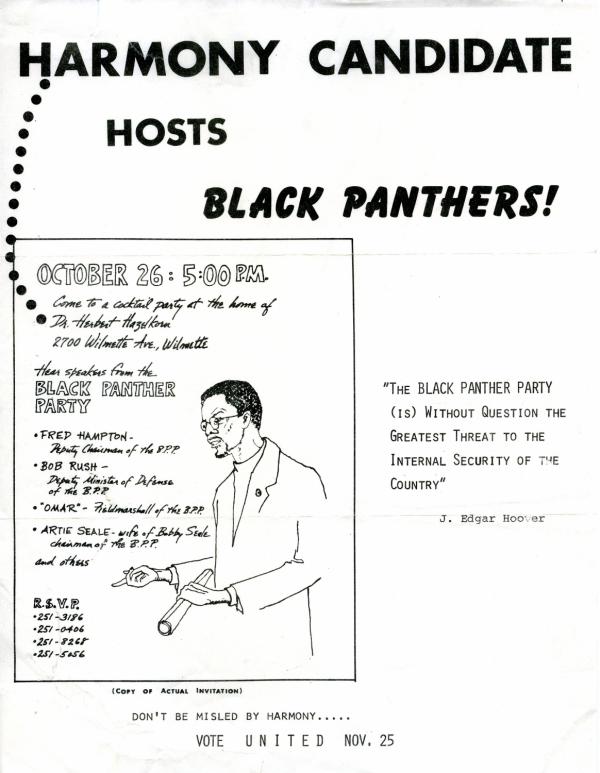 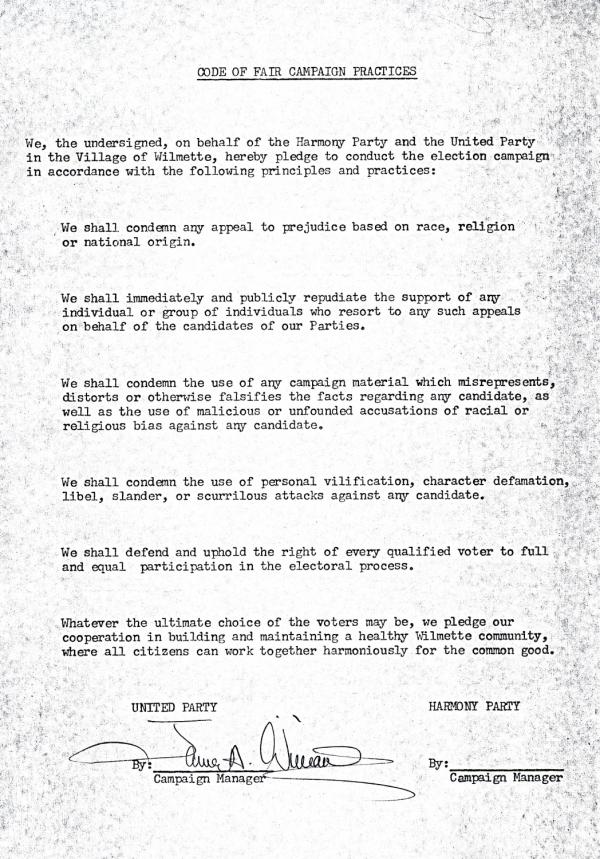 After months of mudslinging, the Black Panther Party issue, and an inappropriate comment about the Jewish community in Wilmette from James A. Williams, campaign manager of the United Party, the Anti-Defamation League intervened. Several members of both parties had been trying to divide the parties based on religion, arguing that the Jewish community in Wilmette supported the Harmony Party, while other religious groups supported the United Party. The ADL asked both parties to sign a “Code of Fair Campaign Practices,” which condemned any attacks based on character, race, religion, or nationality.

The two-party system would remain in effect for only a short time. In 1975, the only political party left was the United Party; the rest of the candidates ran as independents, and they all won. Since that election, every candidate has run for Village office as an independent.

There were very few differences in the policies advocated by the two parties, but several issues of the Sixties caused such passion that the election evolved into a bitter fight. According to Vernon Squires, any harsh feelings left over from the election of 1969 subsided years later. Although there have been other controversial political issues in Wilmette since 1969, such as subsidized housing and school closings, none have produced such tensions as the ’69 election.