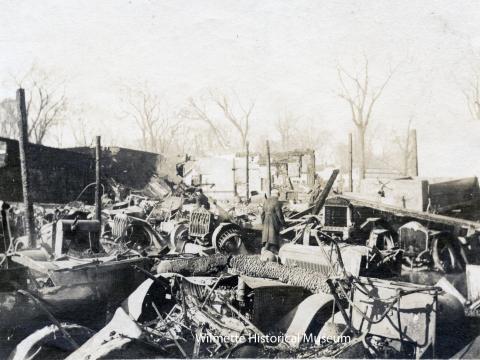 A Wilmette native and old friend of the WHM, Harold Lundberg, Jr., stopped by the other day with some snapshots that had belonged to his dad.  This one in particular caught our eye.  On the back, in pencil, is the note, “Photo by Waldo. The garage fire in 1922.”  We don’t know who “Waldo” was, but we’d run across mention of the 1922 garage fire, which made the front page of the Lake Shore News that year.  As fires go, it was pretty spectacular.  In the early morning hours of January 21, a Saturday, the Weber and Smith garage — a big commercial car storage place on Green Bay Road, where Imperial Motors is now — suddenly burst into flames.  In a matter of minutes, the building’s roof and walls collapsed, the gas tanks in the cars began to explode one after another, and flames were shooting hundreds of feet in the air.

The Wilmette Fire Department was quickly on the scene. The station was just down the street in those days (where Walgreens is now), and the year before the department had purchased its first hook-and-ladder fire engine, an American La France model that would be their pride and joy for the next 20 years. Walter Zibble, who had been hired in 1906 to drive the department’s horse-drawn hose cart, became Wilmette’s first full-time fire chief that same year, 1921.  With help from  Winnetka’s firefighters, the blaze was prevented from spreading to the buildings on either side, but the garage and its contents were a total loss.  Seventy-six cars and trucks were reduced to charred bits of junk.  Some of them must have been real beauties, too: if you look closely at this photo you can make out some impressive-looking grills amid the wreckage.

We knew a little about the fire from the paper, but we had no pictures at all…until now.  (Thanks, Mr. Lundberg!)   This is one of the things we love best about the museum biz: you just never know when somebody’s going to come walking in the door with some fascinating little piece of history.