Remembering Those Who Served this Memorial Day 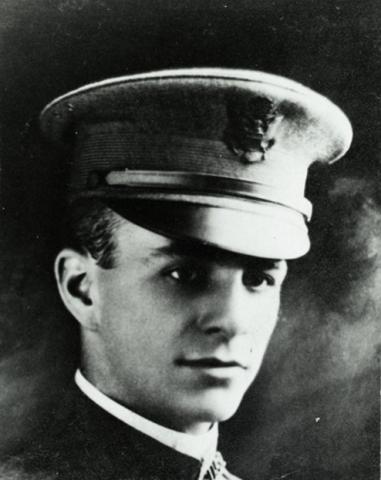 Once again, Memorial Day weekend has snuck up on us. As we take the time to remember and thank those who have served in the Armed Forces across the nation, let us also remember Wilmette’s local involvement and rich history through challenging times of war and crisis. Here at the Wilmette Historical Museum, there is a wealth of resources that detail what Wilmette and Gross Point were like during wartime, providing stories about the residents who pulled together to aid the war effort from home, as well as those who served and sacrificed their lives.

With specific regard to World War I, there is also information about the Wilmette locals who served in the four-volume Honor Roll in World War, Wilmette, Illinois, which is accessible at the museum. This particular resource left an impression on me when I interned at the museum in the summer of 2019, as I spent many hours digitizing the aged pages of those Honor Roll volumes, reading about the veterans’ lives and scanning their photographs. Franklin Barney Bellows, for instance, is a name that is very familiar among the museum staff, as he famously died in the line of duty after securing crucial information on a reconnaissance mission in France.

Born in Evanston in 1896, Bellows began school in Evanston and eventually attended New Trier High School, graduating in 1913. His family lived at 1204 Ashland Avenue in Wilmette and later at 1109 Greenwood Avenue, the address that Bellows gave when he enlisted for the War at Fort Sheridan. Bellows was also the first person to graduate from Northwestern University in uniform on June 13, 1917. He ultimately volunteered for the air service, sailing for France in March 1918. Bellows was posthumously awarded the Distinguished Service Cross for heroism in combat, as well as the Croix de Guerre, a French military honor for bravery in battle. He is buried in the American Military Cemetery in Saint Mihiel, France.

Stories like that of Alfred J. Francesco tug on one’s heart strings. Born in Italy in 1897, Francesco came to America as a young boy and worked in a garage in Wilmette. He lived with the family of Ira W. Sipes, who lived at 518 Park Avenue in Wilmette. He ultimately volunteered for the U.S. Army in 1917 in the hopes of being deployed to Italy to reunite with his mother. Francesco ended up being the first Wilmette local to be killed in World War I. He is honored on the War Memorial in downtown Wilmette and at the Trinity United Methodist Church of Wilmette. 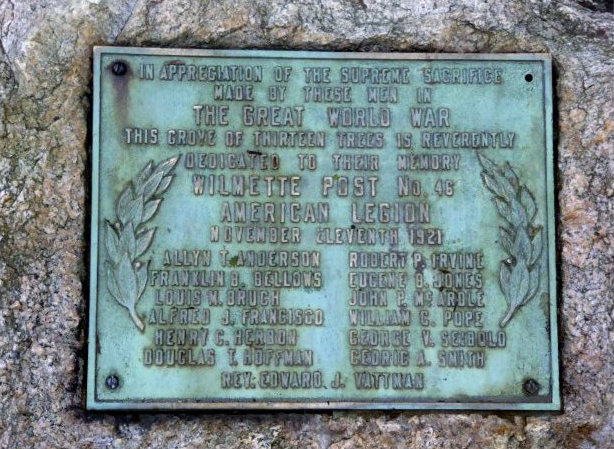 A memorial plaque, located in a grove of trees in Gillson Park. This grove specifically honors the 13 Wilmette men who died in World War I. It was planted by the Wilmette American Legion Post 46 on November 11, 1921.

By the end of the experience of working with these incredible wartime stories, I felt a stronger connection with Wilmette, my hometown, than I had ever had before. More than anything, I came to recognize and appreciate the humanity that lived and breathed within those pages. There were war heroes who tragically died in battle, those who never saw action in battle, and some who were in-between those two extremes. Some of these men and women came home after the War and went on to live long and accomplished lives, while some never returned. Some were long-time Wilmette residents, while others simply passed through at one time or another. Although they led diverse lives, the home that they found in Wilmette was what united them. What a privilege it is to remember each of their names, even after they are gone.

If you are interested in exploring more resources about Wilmette during wartime and individual stories like these, you can look through our online collections,  read a feature story on our website about the famous Wilmette Pilots of World War I, and peruse an online publication about Wilmette during the Civil War.