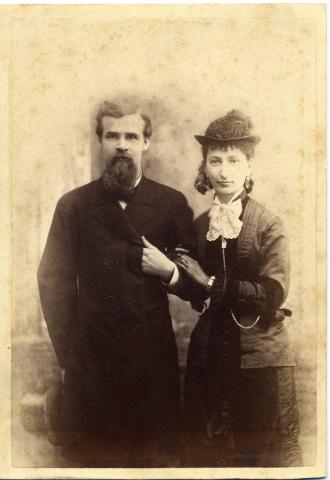 On April 7, 1916, the Annual Meeting of Ye Olde Towne Folkes welcomed Asceneth “Carrie” Stolp as guest speaker. In the speech she gave that night, Stolp recalled a history of Wilmette from the days of the Ouilmette reservation to the founding of Ye Olde Towne Folkes in 1892. Throughout the presentation, which was transcribed and is available to us at the Museum, life in early Wilmette is described in marvelous detail. Carrie Stolp remembered, for example, making jellies from wild crabapples that grew in abundance in the summer, and “high carnival skating from one end of town to the other” in the winter.

Another of her recollections, though, has been particularly intriguing and a bit spooky to us here at the Museum. Stolp said:

When the evening shadows lengthened and the plaintive notes of the whippoorwill were heard in the branches of the forest trees, the ‘gude mon’ and his wife, taking their trusty lantern, sallied forth over the newly made streets… They proceeded to the house of some neighbor, where a phantom party was to be held.

Just what did this curious “Phantom Party” entail? According to Stolp, the party goers arrived in costume and were greeted by the host, who was the sole undisguised participant. Each partygoer was dressed in “ghostly attire made of sheets and pillow cases.” The host presented special cards to each arrival which designated his or her pseudonym for the night. The true identity of the masked people, however, “was often revealed by the decorations known to be used by certain persons”—Mrs. Drury’s well-known high-top boots, for instance, were a dead giveaway.

The party went on in masked (or sheeted) curiousness for a good portion of the night, while “conversation was carried on in muffled tones.” Finally, at the appointed time, the unmasking began, and “pandemonium reigned.” After every person’s true identity was revealed, the night was topped off by unpacking and enjoying baskets of delicious food brought by the guests.

As far as we can tell, this party resembles a masquerade ball with a ghostly twist. Was it a Wilmette specialty or a broader trend in 1800s social life? Either way, perhaps we should consider bringing back the “Phantom Party” for our modern gatherings.