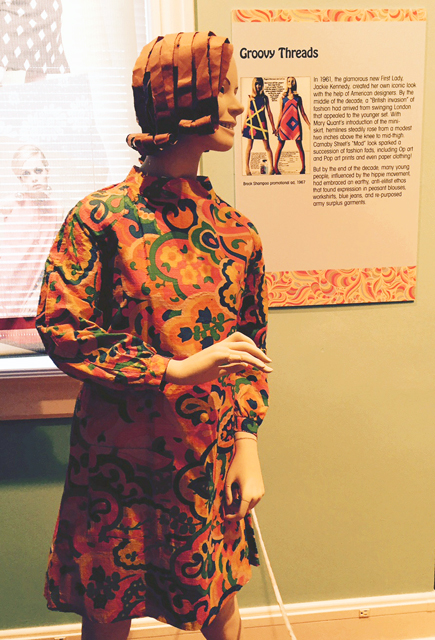 Our past exhibit on the 1960s gave me the opportunity to display one of my favorite pieces housed here at the museum; a dress made of paper! It has vivid colors, a psychedelic print, and it was worn right here in Wilmette.

Mid-sixties dressing was all about youth and fun; from mini-skirts, to body paints, to go-go boots, every fad had its moment in the sun. Paper dresses began with warehouses full of rolls of unsaleable, industrial paper and a promotional gimmick — $1.25 bought you a red bandana print dress or a black and white Op art print dress, both of which truly capitalized on the zeitgeist of the young, sixties consumer who didn’t want to get hung up on owning stuff. In 1966, Scott Paper Company was the pioneer in pushing paper dresses as the next fashion wave. The dress in our collection (see photo at right) was made by a children’s clothing company, Wippette, which is still in business – though they no longer do the paper dress thing. The convenience of cheap, lightweight, disposable, brightly-colored garments was irresistible and hundreds of thousands were made and sold. As one can imagine, problems soon became apparent (most likely during a sudden spring shower). New and now as a paper dress was, turns out it was uncomfortable, prone to embarrassing “costume malfunctions,” and likely to smear ink all over mom’s Naugahyde dinette chairs. By late 1968, the fad was, shall we say, disposed of, along with most of the dresses, which makes the survival of ours so improbable, and so cool. Recently, one critic has re-examined the demise of the paper dress, arguing that paper clothing may be poised to make a comeback. Well, maybe, but I have my doubts.

Just days before our exhibit opened, I happened upon the May 27, 1968, issue of the Wilmette Life. “Paper Fashions Grow ‘n’ Grow” was a headline that stopped me in my tracks. The article explains that a Wilmette resident with dress design knowledge and an enterprising spirit, took the paper dress idea one step further. Jita Merson of 3506 Greenwood Avenue found that a sheer, non-woven fabric made of pressed rayon fibers (think Handi-wipes) had much more resilience and turgor than plain old paper. She loved the drip-dry and non-wrinkling qualities of the material and used her abilities to put together exhibits and fashion shows of dresses, bathing suits, underwear, nightwear, even a wedding gown for one of her daughters. She even took on a Glenbrook North High School art student to silk- screen her fabrics. Not satisfied with just rayon fiber, she branched out into bubble-wrap and a metallic cloth resembling quilted aluminum foil. Her fashions were a hit and in some demand, prompting her to announce that she would soon be opening a studio in the Decagon Building at 466 Central Road, in Northfield, Illinois. Did she ever do it? I can’t find the answer yet but would love to know more about her and her life as a paper tigress.