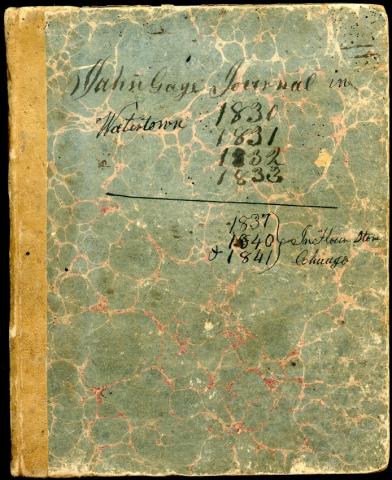 John Gage used this marbled cover notebook in our collection as a journal beginning on June 7, 1830. On the first page he explained his purpose quite clearly: “Bot this book this day. I paid 4/ for it calculating to use it for a private journal of what transpires from day to day.”

John, his wife Portia, and their three sons were early land developers of Wilmette and helped build much of the early infrastructure, including the first post office and parceling residential lots. John Gage purchased a large piece of land, over 130 acres, north of Elmwood Avenue in 1857. It became known as Gage’s Addition to Wilmette.  Find out more about the Gage family in this online exhibit.

Back in 1830, though, John and Portia lived in upstate New York. When this journal was begun, the pair were not even married yet. On October 4th of that year, he wrote, “At 10oclock AM was married by Pitt Morse to Portia Kellogg.”

Gage recorded big and small events in life. He wrote about marriage and death and all other things in between, including work and books he read. Like many of us, though, Gage eventually let his journal fall by the wayside. “I am most tempted to quit writing in this book as it seems to be so much neglected,” he confessed.

In 1836, the family moved to Chicago for John’s flour mill business. It was around that time when Gage began to use the notebook as a ledger for the flour mill and stopped journaling altogether. We are, however, grateful for the few glimpses this artifact provides.

Diarists usually write for themselves. Most don’t expect their private writings to be read by anyone, let alone to end up in a museum, but today we’re in the unique place of knowing we’re living through history!

You may feel inspired by reading the words of others living through important moments in history. Here are some examples of journals and diaries from writers across the country and the world. These have been made available to us online:

One of the earliest personal accounts from England in the 17th century.

Some connections have been made to Pepys, who lived and journaled during the Great Plague of London, and our current pandemic. A parody Twitter account has even popped up, which puts Pepys in modern times.

Historian Laurel Thatcher Ulrich wrote her book, A Midwife’s Tale: The Life of Martha Ballard Based on Her Diary 1795-1812 after working with this unique source for eight years.

The Smithsonian asked volunteers to help transcribe diaries from people all over the country across history, from a prospector in the Gold Rush to a hiker on the Appalachian trail. The project is now complete, and you can view the diaries and transcriptions.

The Smithsonian also explored American diaries in a virtual conversation.

An African-American woman in Philadelphia writes during the civil war.
Read More