Exploring Collections at Home – Civil Rights on the North Shore 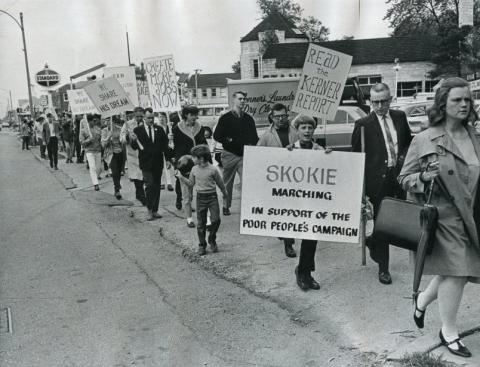 In 1946, shortly after the end of World War II, red swastikas were painted on the North Shore Congregation Israel synagogue in Glencoe. In response to this act of desecration, a group of residents organized the North Shore Citizens’ Committee, an interfaith, interracial group of about 500 North Shore families. The group, based in the Winnetka Community House, actively worked to promote integration on the North Shore. Among their projects were efforts to encourage area hospitals to open their doors to people of color, to lift membership restrictions in recreational facilities, and to end discrimination in housing, particularly on the basis of religion and race. One example given was when an Asian family purchased a home in a North Shore community in the mid-1950s, and some residents tried to discourage them from moving in. Committee members visited the neighbors and tried to smooth the way for the family, resulting in a welcoming atmosphere for them.

Among the Wilmette residents active in this group in the mid-1950s were Dr. Martin Bickham, Robert Cleland, Margaret Abeles, William Gobble, and Harvey Aki. The Citizens’ Committee (later renamed the North Shore Human Relations Committee) was active into the 1960s, when many communities, including Wilmette, created their own groups.

Wilmette’s organization was called the Wilmette Human Relations Committee (WHRC), formed in 1963. Their purpose, as stated in their by-laws, was “to promote social harmony and thereby end prejudice, discrimination, and intolerance in whatever form these shall appear.”   The initial ad hoc committee included Robert Bosshart, Robert Watson, Ellis Kaplan, Rabbi Landau, Rev. Carlson, Dr. Martin Bickham, Arlene Jennrich, and Pat and Patty Crowley; by the mid-1960s, the group had over 1,500 members.

One initiative was to educate people about issues relating to equality. They began by hosting a series of speakers on issues of racism. The first speaker was Canon Charles Raven, chaplain to Queen Elizabeth II, who spoke on the need for equality for all in America. The Committee also organized an interfaith conference each year beginning in about 1965. The speaker series and other educational projects continued for a number of years.

Another thrust of the group was a legislative one. In 1963, Patty Crowley, co-President of WHRC, traveled to Washington, D.C. to attend President Kennedy’s meeting with religious leaders from across the United States. Kennedy spoke to the group about the need for religious leaders to help work toward securing civil rights for all Americans. He had just sent a civil rights bill to Congress and needed their support. (The Civil Rights Act was not enacted until 1964, after Kennedy’s death.) WHRC members worked on a local level to help secure passage of this legislation. Members also traveled to Alabama to participate in the 1965 Selma to Montgomery March led by Dr. Martin Luther King.

WHRC members worked for many years on fair housing issues in Wilmette, culminating in the passage of the fair housing ordinance in 1968. They gathered testimony from people trying to purchase a house as a way to document the problems and push for a solution. One African American man described his experience: “My family and I personally sought housing in this area for almost three years before acquiring our present home [direct from a buyer]. We visited… no less than seven different real estate offices all of which are members of the multiple listing service which operate in this area. We were not shown a single house in this village.” Many Jewish families had similar tales to tell. The WHRC also created what they called an “escort service,” whereby a member of the organization accompanied non-white buyers to see real estate agents as another way to encourage nondiscriminatory home transactions.

For many years, WHRC also reached out to communities in need around the country, sending them books that were to be destroyed by the Wilmette Public Schools as well as food and other supplies.

The Wilmette Human Relations Committee is no longer active, but its members have left a praiseworthy legacy. The Museum would enjoy hearing from former members as well as people who would like to do research in the WHRC archives.