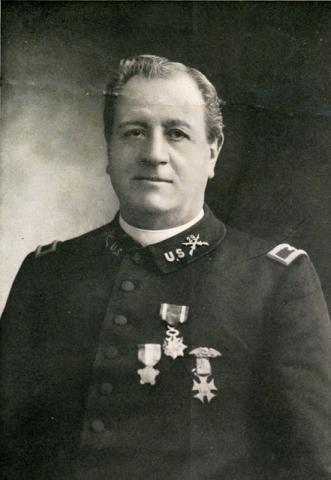 Father Edward J. Vattmann was a retired U.S. Army chaplain who lived at 1733 Lake Avenue in Wilmette. Active in local affairs, he was a familiar and well-loved figure around the village.  His close friend, Theodore Roosevelt, was known to pay a visit to him at that house on occasion. During World War I, Father Vattmann came out of retirement to serve at Fort Sheridan.

When the news came to Wilmette that World War I had ended, Father Vattmann put on his full dress uniform, arranged for a band, and went across the street to St. Joseph School, where he insisted that all the students should be let out of class and assembled in the schoolyard.  Each child was given a small American flag to wave in celebration of the Armistice,  while the music played.  For Ed Schuett, who was a seven-year-old at St. Joe’s at the time, the memory was still fresh over 70 years later. “It was one of the happiest occasions that I can ever remember,” Ed told us. “It was so exhilarating.”

Father Vattmann died the following year  His house still stands on Lake Avenue today.  A small park in Wilmette is named after him, and an imposing monument stands over his grave at Fort Sheridan.  But the most poignant reminder of this local legend can be found in a small grove of trees in Gillson Park across from the Lakeview Center.  On November 11, 1921, Wilmette Post No. 46 of the American Legion dedicated a planting of thirteen trees to commemorate the Wilmette men who died in World War I.  The original trees have all been replaced now, but the grove is still there, and so is the small boulder to which is affixed a bronze marker.  Twelve of the names on the marker are those of young men who died in the war.  The thirteenth name, included as a tribute of esteem and affection by his fellow citizens, is that of Rev. Edward J. Vattmann.